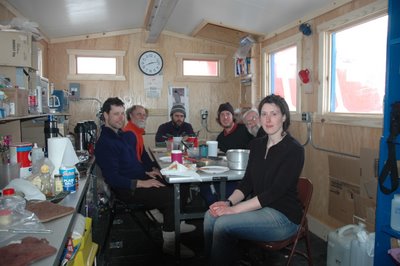 Thanksgiving in Antarctica, not a place I can say I’d ever spend this day! My previous abroad “Turkey-Days” have occurred in Namibia and Italy, and both were significantly warmer than here! Although it is November 23, 2006 here, the Thanksgiving celebration in McMurdo will not occur until this Saturday, the 25th. In fact, apart from the warm weather, Thanksgiving here is no different than any other day. Regina will be doing the dinner tonight, and we were able to dig up some foods which at least in name will replicate a traditional Thanksgiving meal.
Things get a bit crazy out here: 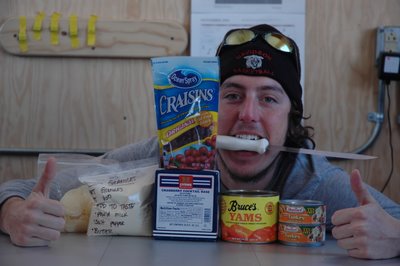 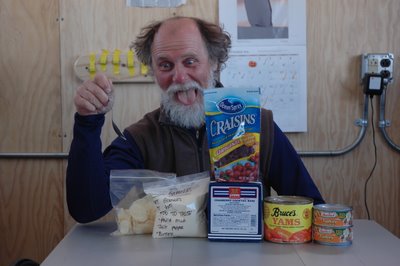 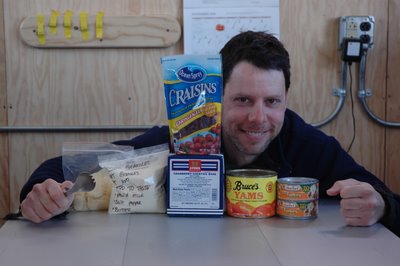 Regina outdid herself with the delectable chocolate cake 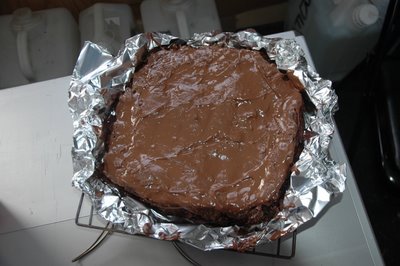 she made, which included all manner of nuts and very alcoholic cranberries! Although it may not be what one would think of as a traditional Thanksgiving feast, we are quite happy with what we came up with, and as usual the food was prepared exceedingly well, and after a day out in the cold anything tastes good! 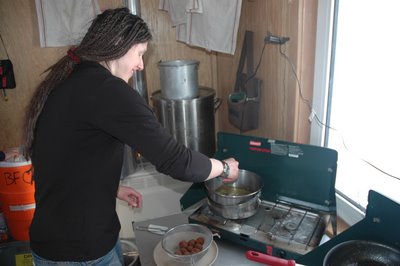 As I am the offspring of an Abraham Lincoln scholar, Thanksgiving it’s a very patriotic day. In 1863 Lincoln declared Thanksgiving as a national day of celebration in hopes to give people something to rejoice over during the long Civil War. To celebrate I took an American flag out into the field with us and flew it in the colony. Out here we find little diversions such as this to humor us and pass the time. 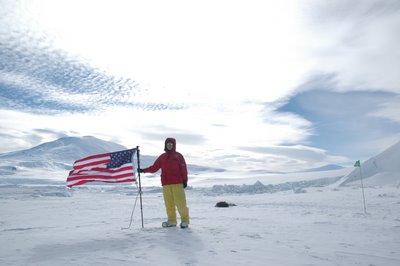 Down here perspective is a bit different, and you are thankful for some very basic things. Today I am thankful for the ability to check the internet, no matter how slow, and realize that there are people back home who are thinking of us. I am thankful for the relatively warm weather, in the positive 20s! I am thankful for the opportunity to be in this beautiful land, though harsh and tiring it truly an amazing place. Each morning walking out and seeing nothing but snow and ice for miles, with Mt. Erebus to the North and Mt. Discovery to the South reminds us how majestic this setting is. I am thankful for my wool socks, which have done an incredible job keeping my feet warm, despite the blasting wind and frigid air. I am thankful for the skua which flew into camp today and humored me with its antics for several minutes, before flying of in search of more productive feeding grounds. 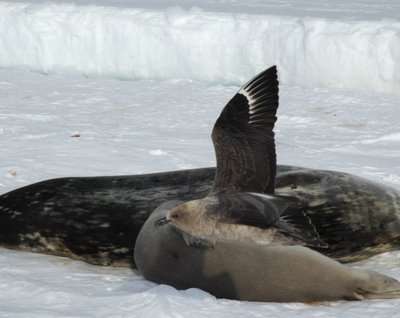 One thing I am not thankful for was a second oppurtunity to taste seal milk. The only way I can describe this fould substance, is to say it tastes like rotten milk mixed with cod liver oil. Children, do not try this at home! 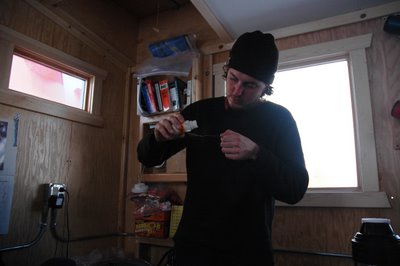 As our November 23, 2006 drew to an end, I was content, and warm, and thankful for that, though I must say I missed some of the comforts of home, and the people who were celebrating back in the states.

Unlike most people, here in Antarctica, we get to celebrate Thanksgiving twice, and this one is a bit more of your typical Thanksgiving meal. We worked a day in the field, but the seals were not particularly cooperative, in fact most of the seals we had hoped to process spent most of their time in the water. 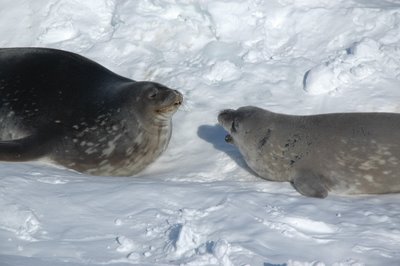 This is becoming more and more of a problem as the pups are fast approaching their weaning weights, and moms are becoming more and more undernourished. We were able to bleed and weigh one mom/pup pair, but that was all. It was a particularly warm day, possibly passing the freezing point, though it was cloudy with lots of wind, so it in fact felt cooler than the last few days. We then packed up and headed for town. It was an easy ride, despite the sore backs which are now prevailing throughout the group.
As we approached McMurdo it was an amazing sight. With the increasing temperatures, the ice conditions are becoming less ideal, and there were slushy ridges, making snow-mobile travel a bit bumpier. As we walked up the transition from the sea ice onto land we saw a site I have not seen for some months, flowing water! The land here is very dark, all black, red and brown rocks, and that absorbs the heat from the sun, which is truly quite intense down here. This heat absorption, coupled with the increasing temperatures, creates faster than expected melt of the snow. I was shocked how dark the hills surrounding McMurdo have become, as only a few weeks ago they were still entirely covered with snow and ice. The running water caused by snow melt, was in fact a quickly flowing stream, which was a wonder for me to behold. After prying myself away from the sight of moving water, I headed to our storage, where if memory served, I had a clean shirt, and a pair of jeans. Luckily memory was correct in this case.
I headed to our dorm room, took a nice long, hot shower, and changed into clean clothes, quite a treat, and something else which I am thankful for! We then headed to the Galley (dining hall) and were in for quite a treat, after the initial wait in a line! 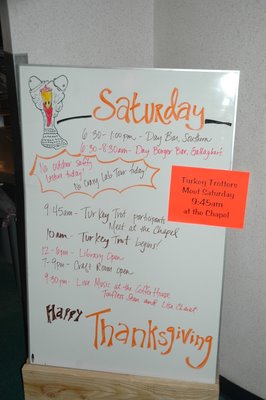 The food was AMAZING, I must give it to the kitchen staff here, and they know how to make a meal. It is quite possibly the best Thanksgiving meal I’ve ever had, rivaled only by Thanksgiving in Florence at Aqua al Due, which was helped with many liters of wine. The dinner in Antarctica had everything one could hope for, including fresh vegetables, a rarity in these parts! In fact, we surmised these vegetables must have been shipped down in the last 24 hours, as the lettuce was not even wilted! My dinner consisted of healthy portions of Turkey, stuffing, cranberry sauce, salad, mashed potatoes, green bean casserole, bread, roast beef, mixed roots, shrimp, fruit and was finished of with two pieces of pie, one pumpkin and one pecan! 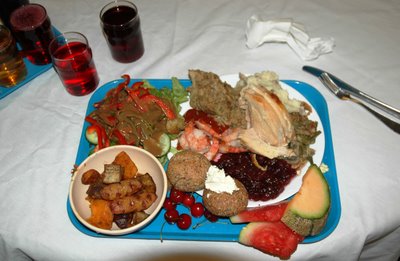 As I tend to do on days like this, I gorged myself, spending the next half hour complaining about my stomach, though I must say, this time it was well worth it. 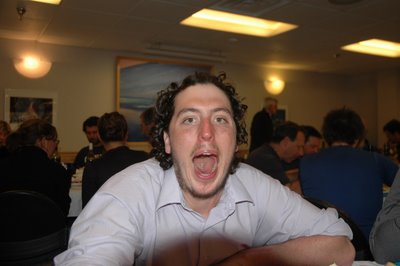 The kitchen staff made and appearance, and were quickly greeted with a standing ovation, and one I must say, which was well deserved.
After we let dinner stew for a bit in our bellies, Mike, Darryl and I headed over to the bar for a nightcap of whiskies and beer, before retiring to bed, full and quite content. Tonight we will sleep with our showered selves, on clean sheets, in complete darkness, some more small things I am quite thankful for.
Posted by daniscold at 2:16 AM