Although Antarctica is not the easiest place to travel around, we as a science grantee group are quite privileged in our ability to move about the general area of Hutton Cliffs, where we are camped.
Map of Hutton Cliffs area (with snow-mobile route in blue): 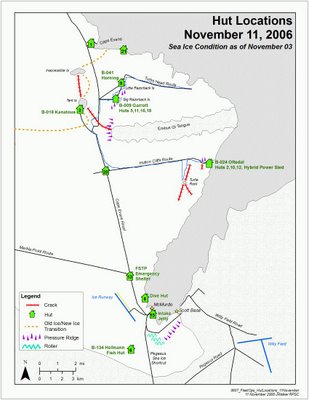 The other day, Rich and I went for a 3 hour walk and climb, from our camp to Turtle Rock, about two miles It was a beautiful day, so the walk was quite enjoyable, little wind and temperatures around 10 degrees. On the way we saw dead seals frozen into the ice, they must have been there for some time as they were partially decayed. Due to the cold temperatures, and lack of humidity, thinks tend to mummify down here. As we got closer to Turtle Rock, it seemed to shrink, though the pressure ridges around it grew, making the approach a bit of an ordeal, we had to constantly probe the snow for hidden cracks.
Turtle Rock from approximately 1/2 km: 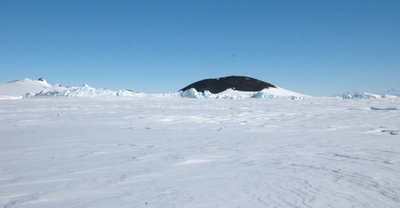 As we got closer we realized there were quite a few seals at this colony. Though there were many moms and pups, there appeared to be quite a few males, unlike our Hutton Cliffs colony which is predominately females with pups. One other interesting aspect of this colony was the difference in holes to the water. Whereas at our study sight the holes are quite shallow, and easy for the pups to get in and out of, these holes were quite vertically deep, much more like the hole of a woodchuck.
When Rich and I arrived at the foot of Turtle Rock, we decided it would be worth a climb, and hoped it would not be too hard.
Standing at foot of Turtle Rock: 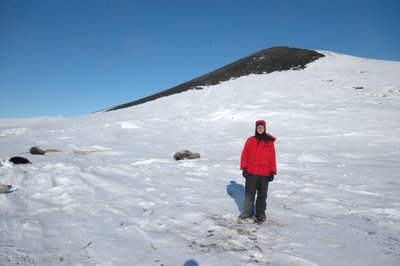 Luckily the climb was quite easy, even in our cold-weather boots, with stable-icers we were able to make the summit in about ten minutes. The climb was a bit difficult as the "mountain" was all scree, and for every step forward you took, you'd slide back half a step, but we made it. Sitting atop was amazing, with really beautiful views of Mt. Erebus and Castle Rock.

Rich and I on top of Turtle Rock: 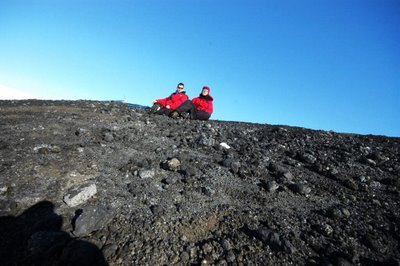 Me admiring the views: 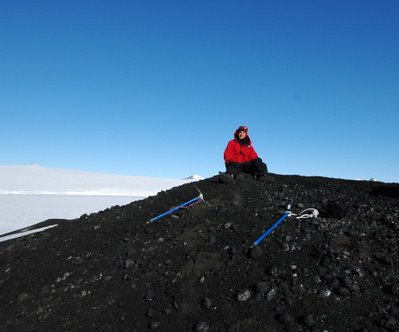 The rocks were also amazing, as it is all volcanic there were some amazing mineral formations scattered throughout, which we admired before beginning our decent. The walk back was quite cold, as the wind had picked up, and the sun was radiating less heat due to the later hour. We arrived hungry and ready for dinner!

The next day, our trip had inspired the group to head out on snow-mobiles to view the other colonies in the vicinity. After finishing our day in the field we started up snow-mobiles and headed out to three other colonies, Turtle Rock, Big Razorback and Turk's Head.

We began our trip heading to Turtle Rock, where Rich and I had gone the day before. The road was quite bumpy, and some of the group was none to happy with the rough ride. After some time exploring again, we hopped back on our ski-doos and backtracked to the Hutton Cliffs road, and proceeded to the Cape-Evans road where we turned North/North-West. After several kilometers we were forced detour due to open water at the tip of the Erebus Glacier Tongue. From there we turned East toward Big Razorback
Big Razorback: 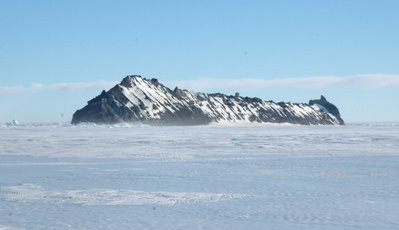 where one the only other sea-ice camp is located. Walking around Razorback was fascinating, yet again a very different make up to the colony. Along the north tip of Razorback the wind was blowing so hard we could barely stand up, but the formations were breathtaking.
North end of Big Razorback: 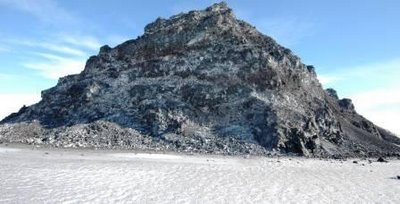 Self portrait in front of Razorback pressure ridges: 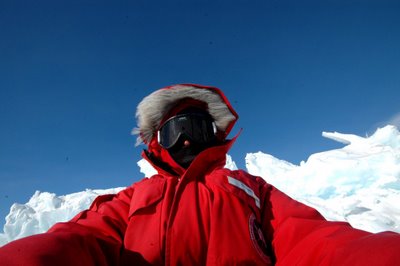 There were many more dead seal pups at this colony, a so far unexplained phenomenon. On average about 15% of Weddell Seal pups die before they are weaned, so maybe our colony is an exceptionally low mortality rate. The Razorback colony was large, likely numbering around 75 individuals, many with pups, though again more single adults than we have at Hutton Cliffs.

Mom and Pup at South end of Big Razorback: 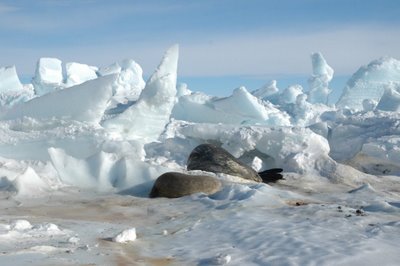 From Big Razorback we headed out in a North-easterly direction towards Mt. Erebus, where we would arrive at Turks Head, the most stunning of the formations. The rock towered above us, and had a particularly interesting ice-ridge at the base. The rock was amazingly colored, once I remembered to take of my snow-mobile goggles, and I spent some time staring in awe at the surrounding. After spending so much time surrounded by white snow and ice, these black, brown and red colors were almost a sensory overload!
Turks Head: 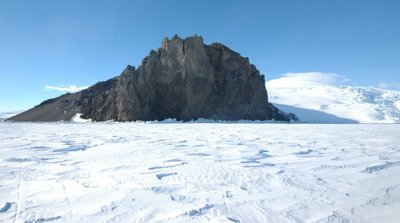 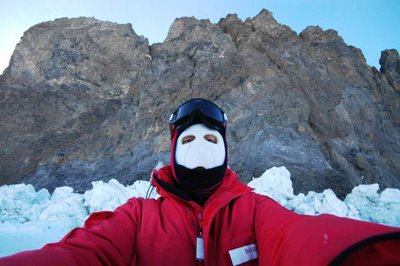 Pressure ridges at base of Turks Head: 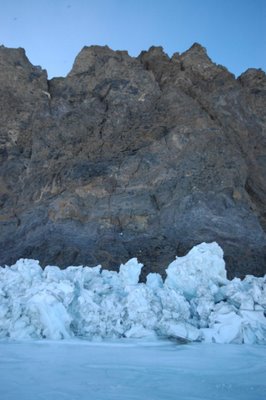 Seals in front of Turks Head: 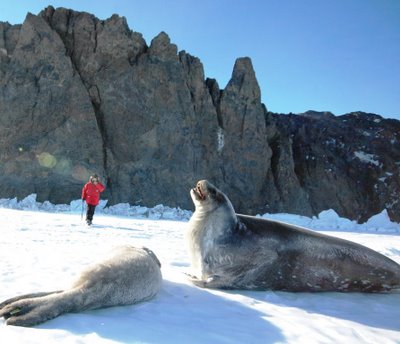 Laying down on the job: 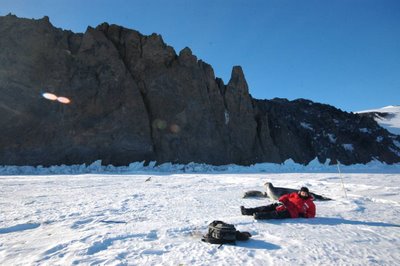 Avalanche coming down from Erebus: 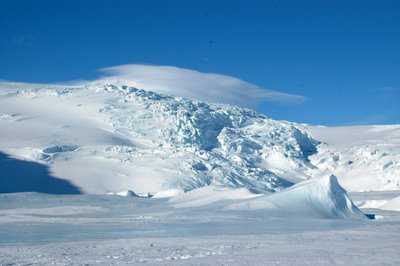 After some time exploring the colony, we hopped back on our snow-mobiles and headed back to Hutton Cliffs, an enjoyable, though slightly windy ride.
Posted by daniscold at 5:52 PM