So first and foremost I am a bird guy. I came to Antarctica on this amazing project not for the seals, but for the chance to do some real science and see this continent, and hopefully see some birds. Finally I have seen a bird, not a penguin, but still a bird. I had been in such bird withdrawal that I was in fact dreaming about them at night, weird, I know. Our days have been long, but we are now well past the half way point for original captures of seal pairs, and hopefully the pace will slow a bit so we can breathe. The weather has been great, for the most part, cold, as Antarctica tends to be, but with very little wind. We've shifted our work day to the later part of the day, starting in the field around 2 PM, and finishing around 10 or a bit later. This has been an effort to minimize the wind, and so far seems to be working. But, back to the birds. There is not much bird life on the continent, and where we are, at best I can hope to see only four to five species. The bird I saw soaring on the horizon was a South Polar Skua, (Catharacta maccormicki), essentially a seagull on steroids. For much of the year they roam over the oceans, often close to the coasts catching small fish and scavenging whenever something edible is available. They come to nest on the cliffs of Antarctica, where there is plenty of food during this time of year. Seals are pupping and penguins are hatching. 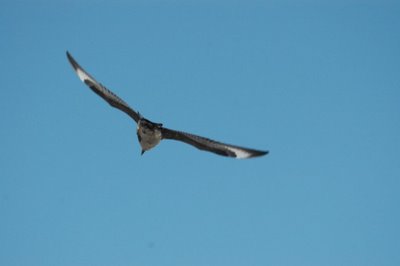 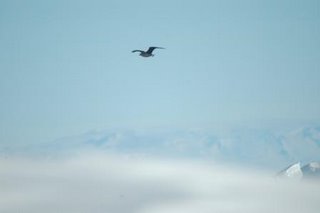 The scuas eat all manner of afterbirth and such from the seals, and may actually kill a weakened and dying pup, but this is rare. The penguin rookeries are a bonanza of food, and this is where many of them will set up shop. But without further adieu, here are two pictures of the south polar skua, a rather bland bird, which nonetheless made me jump for joy when I saw it! 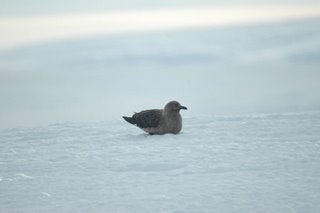 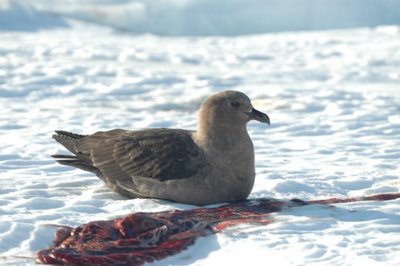 Posted by daniscold at 5:02 PM