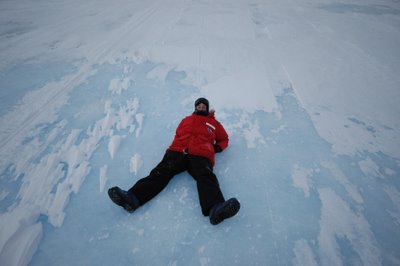 Antarctica is almost entirely white, meaning there is very little to break up the landscape and help with depth perception. Distances are extremely deceiving. On a clear day you can look at something ten miles away, and think it is a short walk. For this reason we've been flagging all our routes. While it seems a bit excessive to place a red flag in the snow/ice every 150 feet, it has already come in handy; when the snow blows you can't see where you're going, so the flags are nice.
We worked out a handy system, where one person would drive the ski-doo (snow-mobile) while another person would sit on the back trailer with all the flags. A 150 foot rope was tied to the back of the trailer, and dragged behind us. Each time the end of the rope, which is green and red for visual contrast, reached the last flag; another one was thrown to the snow. 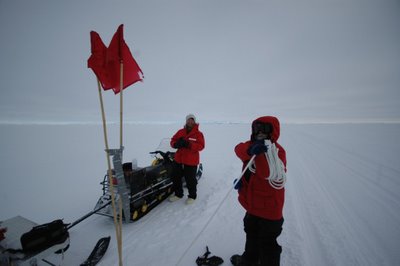 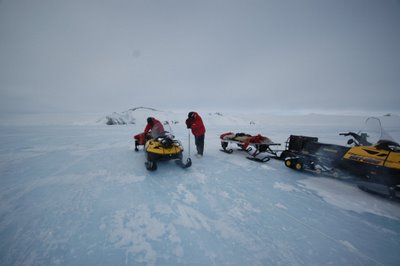 When this was finished we would back track, and either stick the flagdirectly into the snow, or drill a hole if it was too hard and slip the flag into it, packing the opening with loose snow. While this was tedious, and tiring, it was effective, and we have now flagged some ten miles of routes quite well, and GPSed them into our database for blind navigation, if it comes to such.
Drilling holes was a bit more interesting. We have several holes in various places, for various reasons. The first and most important is our "toilet." A bit hole in the ice which goes down some ten feet, kind of a frozen porta-potty. Not the nicest facilities on earth, but they will do, I hope! We then have another hole for waste water, dish water and such. These holes freeze up and are then dug out with heavy equipment at the end of the season and disposed of in the appropriate way. 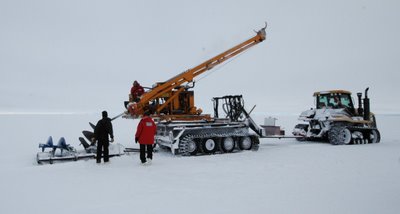 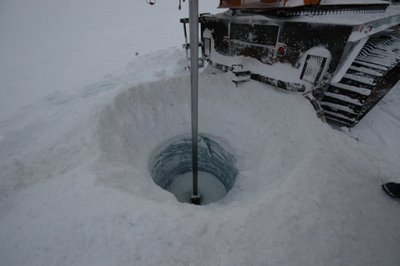 more drilling machines, these things are huge, you can see the slushy water coming up in this one, the ice was 6.5 meters thick 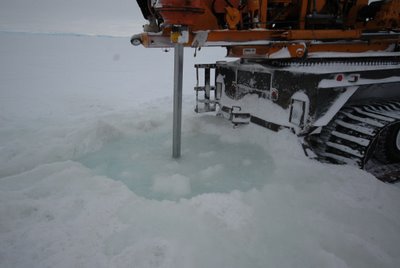 The more interesting holes are the fishing holes. We have two, one some 100 meters from camp, and one approximately 7 miles from camp. These holes are to be kept open, manually, in hopes of catching fish. The oceans below us are very rich in fish life, and we hope to catch much of the fish the seals are eating to aide our study. Unfortunately even sea water readily freezes at these temperatures, and we are forced to chip out the holes on a daily basis. To do this we use a huge ice chipper (sharp, heavy pole), shovel and strainer on a stick. When we have thoroughly cleaned out the hole we cover it with a Styrofoam/wood "man-hole cover" and bury it with snow, all for insulation. These fishing holes have a secondary purpose, seal pull out holes. As these open, we hope the seals will begin to use them as a means of getting to the surface, giving us readily accessible specimens. The downside of this is our fish supplies will dwindle as the seals will be preying upon them, but for seals I think we can sacrifice some fish. As we are moving out to the ice these questions will become clearer, or so I hope!

Posted by daniscold at 1:30 PM