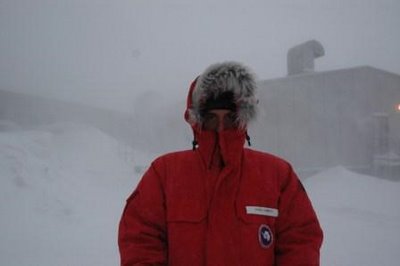 It has been a busy few days here in Antarctica. The beautiful weather has continued, enabling us to spend a fair bit of time outside. One problem with this "beautiful" weather is we were able to have emergency camping class, which though useful is not necessarily the most enjoyable experience! First I should explain the three weather levels here, Condition 3, Condition 2 and Condition 1. Condition 3, which it has been most of my time here so far, is by far the nicest; there are no restrictions on outdoor activities at this point. It means there is no severe wind, more than 30 mph and good visibility. That being said, in a matter of minutes it can go from beautiful to deadly, so we have taken condition 3 with a grain of salt. Condition 2 means excessively cold, below -30 Fahrenheit and or strong sustained winds, under this you can not go on walks and are encouraged to stay inside, though you can walk from building to building. Condition 1 mean stop whatever you're doing, wherever you are, and don't move. If you are in the field this means build a shelter and don't move until the condition has lessened. This is where Happy Camper comes in. For anyone who will leave the confines of McMurdo for more than a just a short hike, you are required to go through this. So on to Happy Camper!

After some rather long briefings, we were loaded into big Antarctic movers, essentially tanks with bench seating and driven out onto the Ross Ice Shelf. This is the ice just off the "actual continent" but for all intensive purposes it is solid. I believe they said it was some 700 feet thick, I guess we won't fall through that! We were driven for about twenty minutes or so to the site, which is probably about 2 miles from McMurdo as the skua, the native seagull steroids, flies. As there are no crows, skuas seem to be the default, though they have not arrived for the summer yet. Apparently the birds are smart enough to stay out of here until it warms a bit, only we are dumb enough to show up in early October! Enough with the tangent, back to happy camper. So armed with only our sleeping bags, two thin sleeping mats and our extreme weather gear we were dropped in the shadow of Mt. Erebus, the most active volcano of the region, and also the most common point of reference on the skyline. 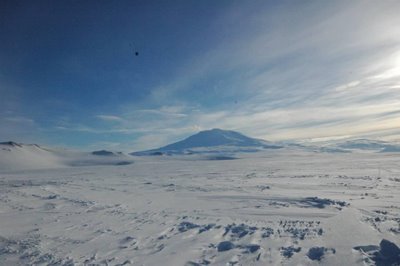 We then had our tents, ice axes, saws and shovels given to us and we were told to build camp. The tents unfortunately are not what you want in these conditions. They are essentially the kind of tent I would use to camp in the north-east US during late fall/early winter! Not warm, not big, and not particularly good, but they are what are placed in survival bags, so they were what we used! After setting up the tents, we began to build our ice wall, in hopes of shielding our tents from the cold winds. This as it turned out was quite fun, though a lot of work. While we were quarrying the snow blocks the wind picked up quite a bit. While the temperature was around -20 Celsius, the wind is what really gets you. The clothing keeps you quite warm, even to the point of sweating, but the second the wind hits you all your heat is stolen! This is why layers are so important, you are constantly dressing and undressing to keep the proper temperature, quite a feat in these conditions! To build the ice wall, we quarried large blocks of snow from the ground. The snow here is permanently packed, and though very dry, it holds together if taken out properly. To get it out you cut a rectangle in the snow about 2.5 feet long and 1.5 feet wide, and then with a shovel pried it out of the ground. The first few blocks were a bit hard, but after that they came up quite easily. After several hours of cutting, digging and placing we had a very substantial ice wall built and we took a break. 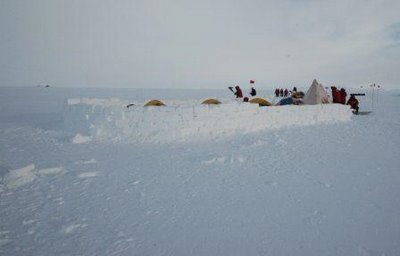 You are working so hard to keep your body warm in these temperatures that food is a constant concern. We had plenty of chocolate, nuts and slim jims, calories are important down here! Water is also vital, you must drink approximately 1 gallon water each day to keep properly hydrated, and I am finding this a bit tough as the water tends to freeze in the water bottle before you can drink a liter! But these are all minor problems and the longer we're here, the easier it will become. So with camp built we ate our dinner, dehydrated food which you pour two cups of boiling water into, not 5 star, but good enough. In fact I was so hungry I quite enjoyed it! 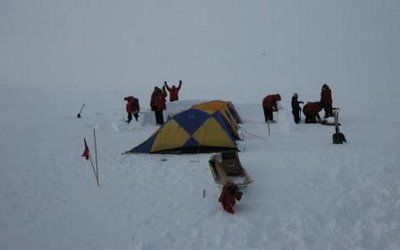 After dinner we went for a walk, more of a run and then retired into our tents for the evening. I am still having some trouble acclimating to the permanent light, sleeping during the day has never been my cup of tea, but again, here it is a way of life! Just before getting into bed and ran a few sprints to get my blood pumping and create some heat. I then popped into my tent, stripped off all my clothes, quite cold, and changed into dry layers before slipping into my bag. I unfortunately shared a tent with a smoker, and the smell inside then tent took some getting used to, a mixture of body odor, old smoke and cold! None the less, it was quite exhilarating so spend our first night in the elements. Sleep came quickly and I actually slept through the "night" I think. When I awoke I was in for a surprise! I was just tall enough that my feet and head touched the walls of the tent. Under normal circumstances this is no problem, but here it created some issues. It was so cold in the night that our breathing had created a layer of snow on the inside of the tent! This snow had in turn melted due to our body heat and soaked the two end of my bag which had been touching the walls. To make matters worse I had not properly stored my clothing inside my bag to keep in warm, and my layers, which were wet with sweat the night before, were now frozen stiff! To remedy this I slid into the stiff, cold clothing and ran in circles to thaw them! With my newly thawed clothes, and still somewhat frozen boots, I began to break down camp with the rest of the team. Although the night was not exactly the Ritz Carlton, the views from the tent made it all worth while, and proved that we would in fact be able to survive in this amazing, yet harsh environment! 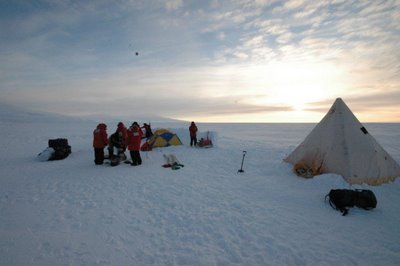 Posted by daniscold at 3:46 PM

Hi, i was looking over your blog and didn't
quite find what I was looking for. I'm looking for
different ways to earn money... I did find this though...
a place where you can make some nice extra cash secret shopping.
I made over $900 last month having fun!
make extra money