Well we arrived in Antarctica today!

It was somewhat surreal, flying inside a huge military cargo plane, with no windows, knowing we were over a horribly turbulent ocean, and planning to fly 2500 miles to land on a sheet of ice! We woke at 4 AM New Zealand time and headed to the airport, where we were outfitted in all of our cold weather gear. We were given so much gear i had to pack two extra bags wtih it! Because we will be using slightly radioactive isotopes on the seals, we need a spare set of clothing, all outerwear, to wear into areas which must remain contaminate free! So, back to the airplane! We got to the airport at around 445 and began to get dressed. We then went through the weighing of our bags and cleared security, before having an hour or so to hang out before our brief film, and then loading up! It was cold and rainy in Christ Church as we boarded a C-17. 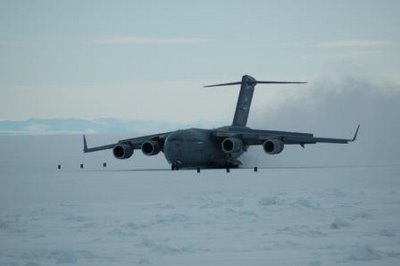 Surprisingly the plane was quite comfortable, though the difference in temperatures between the front and back was amazing! The front was quite warm and the back quite cold. As I was one of the first on the plane, I picked a seat towards the back! People sitting up front were dripping sweat on themselves by the first hour of the flight! A secondary problem was the bathroom situation! There was one bathroom on the entire plane for 150 odd passengers and 15 or so crew people! Needless to say, I did not drink much on the plane in hopes of avoiding the cesspool, which I did! The flight was remarkably smooth, actually much better than the other 3 flights I've taken in the past few days, and the leg room was far superior to any coach class plane I've ever been on! I guess they figure we're going to have a tough enough time, might as well make our flight as nice as possible! At one point they allowed passengers into the cockpit where we got the opportunity to view the ice from the airplane, it was quite amazing. The scariest part of the whole ordeal was landing with no visibility for us. We were essentially sitting in a dark box, which was landing on a strip of ice, and we were the first plane of the summer season! 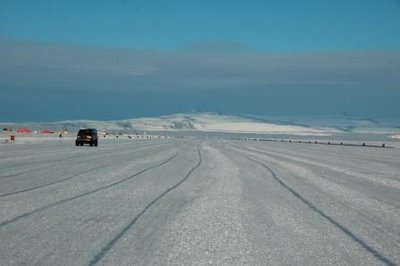 Essentially we land on a two mile long ice runway and as soon as you touch down you turn the engines onto full reverse and hope you stop! Luckily we did! We then got off the plane, and set foot on the Antarctic continent! It was amazing, and the place is stunningly beautiful! Luckily it is unseasonably warm, around 0 degrees Fahrenheit, with almost no wind, the best conditions imaginable! We then went to the base and had several more briefings before gathering all our luggage and eating dinner. I am now delirious with exhaustion and about to go to bed! Feel free to ask questions and I'll answer them as best I can. I will give an update on the thumb tomorrow. Right now its raw and bloody, but I believe the issue is in decline, as the pustules have faded quite a bit! Cheers from the coldest place on earth!
Posted by daniscold at 11:25 PM

where is my kidneys? said...

whoah. antarctica. cool. i will keep an eye on this blog.